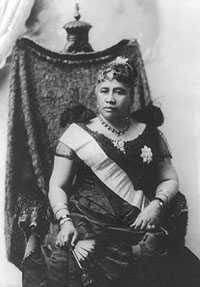 Liliuokalani (02 September 1838–11 November 1917), last sovereign queen of Hawaii, was born in Honolulu, the daughter of high chief Kapaakea and the chiefess, Keohokalole. Her father had been a close adviser of King Kamehameha III. Lydia, as she was named, was hanaied (adopted) at birth, which was a custom of goodwill to solidify relationships, by Abner Paki and his wife, Konia, and she lived in their home “Haleakala.” Paki was a councilor of Kamehameha III. The Pakis had one natural daughter, Bernice Pauahi (Bernice Pauahi Bishop), and throughout her life Liliuokalani, or Lydia Kamakaeha Paki as she was then known, was closer to Bernice than to her own siblings.

When Liliuokalani was four years old, her adoptive parents enrolled her in the Royal School, originally the Chiefs’ Children’s School founded in 1839, which was administered by American missionaries. At the Royal School she became fluent in English, and her moral values were shaped by the influence of the missionaries. She was also an outstanding member of Kawaiaha'o Church, built under the direction of Hiram Bingham (1789–1869), the leader of the first company of missionaries to Hawaii in 1820. As a young girl she was part of the royal circle attending Kamehameha IV and Queen Emma. In 1862 she married John Owen Dominis, the son of an American sea captain. They had no children.

Being primed for the crown’s inheritance, Liliuokalani (her royal name) made several visits throughout the islands to impress her subjects. “It became proper and necessary for me to make a tour of the islands to meet the people, that all classes, rich and poor, planter or fisherman, might have an opportunity to become acquainted with the one who some day should be called upon to hold the highest executive office.” She and her husband also journeyed in 1887 to England in celebration of Queen Victoria’s golden jubilee and were received as royalty. On the way they visited Washington, D.C., where they were received by President Grover Cleveland.

King Kalakaua died in San Francisco in January 1891, and Liliuokalani assumed the throne. One of her first acts was to suggest that there should be a new constitution for Hawaii, because Kalakaua had been forced to submit to the “Bayonet Constitution” of 1887. The Bayonet Constitution had weakened the powers of the monarchy and had forced Kalakaua to relinquish numerous powers to the American members of his cabinet. Liliuokalani attempted this constitutional change during an economic slump after the McKinley Tariff of 1890. American interests in Hawaii began to think of the annexation of Hawaii by the United States in order to reestablish an economic competitive position for the sugar interests. But native Hawaiians desired more detachment from American influences and supported the queen’s new constitution. Economic circumstances plus her willful and stubborn character caused Liliuokalani to lose her throne.

Several members of the queen’s own cabinet, which had not been accepted by the legislature, refused to sign the new constitution, which she attempted to promulgate in January 1893. After she had attempted to rule by edict, a committee of public safety made up of revolutionaries against the queen had been established. This committee sought protection of military forces aboard an American ship in port, the USS Boston. The American minister in Hawaii, John L. Stevens, had ordered the Boston’s troops ashore to defend the interests of Americans and to take control of various governmental buildings. The revolutionaries’ Committee of Public Safety then deposed the queen, abrogated the monarchy, and established a government that later became the Republic of Hawaii (1894). This group then petitioned to be annexed by the United States.

Historically, it was Queen Liliuokalani’s right to issue a new constitution through an edict from the throne as had been done in the past. But the group against her, led by Sanford B. Dole, thought they were protecting themselves against a capricious monarch who had precedent on her side but was politically inexperienced. She wished to restore the balance between local island interests and those of the foreigners who had come increasingly to control large parts of the Hawaiian economy and land. Liliuokalani lost the political battle. Her opponents established a republic and waited for a favorable time to press for annexation to the United States.

During Grover Cleveland’s second term (1893–1897), one of his first acts was to withdraw a treaty of annexation of Hawaii that had been negotiated by his predecessor, Benjamin Harrison (1833–1901), with the annexationists who had deposed the queen. Cleveland believed Liliuokalani to have been wronged and urged the annexationists to restore the queen to her throne. Sanford B. Dole and the republican-annexationists politely refused to do so. Through Cleveland’s support, Liliuokalani hoped to be enthroned again and restored to full power.

In March 1893, James H. Blount arrived, representing President Cleveland, to seek a solution to the problem. He listened to both the annexationists and the restorationists and concluded that the Hawaiian people were on the side of their queen. Blount’s final report also implicated the American minister Stevens in the overthrow of Liliuokalani. Cleveland then instructed Albert S. Willis, the new American minister, to offer to support the queen if she would grant a general amnesty to the annexationists who had dethroned her. Liliuokalani, out of stubbornness, initially refused to grant general amnesty, but by mid-December she changed her mind and offered clemency for her political enemies. Because of her delay, however, she had compromised her political position. President Cleveland had turned the Hawaiian question over to Congress.

On 4 July 1894, the Republic of Hawaii with Sanford B. Dole as president was proclaimed. It was recognized immediately by the U.S. government. In 1895 Liliuokalani was arrested and, after a cache of weapons was found in the gardens of her home, was forced to reside in Iolani Palace. She denied knowledge of this cache, which in fact was intended to be used by her supporters to restore her. After her imprisonment in the palace, her supporters kept her abreast of the news in Hawaii by sending flowers to the palace wrapped in newspapers of the day. In November 1896 she was released and allowed to speak freely. She journeyed to Washington, D.C., in December 1896 to speak directly to Cleveland, but by this time Cleveland was a lame-duck president. The Spanish-American War period witnessed the complete triumph of her enemies. Hawaii was now seen as a strategic bastion to protect other U.S. interests in the Pacific. Hawaii was annexed to the United States through a joint resolution of Congress in 1898.

Liliuokalani lived on for nearly two decades in Honolulu, receiving an annual pension from the legislature, which by 1917 was $15,000. She also received income from various properties, including a 6,000-acre sugar plantation. She was present at most state occasions but had declined the offer to watch the annexation ceremonies as she could not bear to see the Hawaiian flag lowered and the Stars and Stripes put in its place.

In her gracious old age, Liliuokalani became a model Hawaiian who forgave her enemies and stood for all that was virtuous in Hawaii’s grand past. She sought to preserve the Hawaiian traditions. She also continued to write songs, of which her earlier “Aloha Oe” is the best known. She was the most outstanding member of the Kalakaua dynasty in composing music. She also played the piano with a high level of skill as well as the ukulele, guitar, zither, and organ.

Most modern American historians cast Liliuokalani as “the Polynesian chiefess of olden times, in whom centuries of tradition bred a belief in the sacred bond between a people and their land” or as “the strong-willed, well-educated Victorian monarch who valiantly defended her inherited sovereignty and made it her overriding duty to safeguard and preserve Hawaiian independence.” Both characterizations are correct.

Before her death, she established the Liliuokalani Trust to be used for destitute or orphaned Hawaiian children. She died in Honolulu.

The diaries, letters, and documents in regard to Queen Liliuokalani’s personal life are located in the Liliuokalani Collection in the State Archives of Hawaii and also in the Bishop Museum manuscript collection. Additional records related to Liliuokalani and Princess Kaiulani (heir apparent) are to be found in the A. S. Cleghorn Collection, State Archives of Hawaii. Published sources of information include Liliuokalani, Hawaii’s Story by Hawaii’s Queen (1898); William D. Alexander, History of the Later Years of the Hawaiian Monarchy and the Revolution of 1893 (1896), a contemporary view; Lorrin A. Thurston, Memoirs of the Hawaiian Revolution (1936); William A. Russ, The Hawaiian Revolution (1893–94) (1959); Merze Tate, The U.S. and the Hawaiian Kingdom (1965); Julius A. Pratt, The Expansionists of 1898 (1936); Gavan Daws, The Shoal of Time: A History of the Hawaiian Islands (1968); Alfons L. Korn and Barbara Peterson, “Liliuokalani,” in Notable Women of Hawaii, ed. Barbara Bennett Peterson (1984); Ralph S. Kuykendall, The Hawaiian Kingdom, 1874–1893 (1967); Helena G. Allen, The Betrayal of Queen Liliuokalani (1982); and the Hawaii State Foundation on Culture and the Arts pamphlet titled “A Sculpture of Queen Liliuokalani” (1977). An obituary is in Paradise of the Pacific, Jan. 1918, pp. 11 and 15.