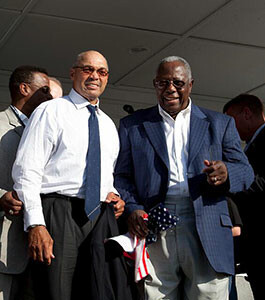 When Aaron was eight his family moved into a windowless two-room house his father had built with discarded lumber in the Black section of Toulminville, Alabama, four miles northwest of Mobile. Aaron loved hitting bottle caps with a broomstick. It became his batting style—lashing at a ball with his weight on his front foot. As a teenager, he developed his game in a segregated, all-Black recreational league.

Aaron was expelled from Central High School in Mobile in 1950 after cutting forty classes to play baseball or listen to Brooklyn Dodgers games on the radio. His hero was Jackie Robinson, who broke the color barrier with the Dodgers in 1947. Aaron was fifteen when he earned three dollars a game playing shortstop with the Mobile Black Bears, a Dodgers farm team.

On 20 November 1951 part-time scout Ed Scott signed the five-foot, eleven-inch, 170-pound Aaron to a contract with a Negro League team, the Indianapolis Clowns. In March 1952, before Aaron graduated from Mobile’s all-Black Joseph Allen Institute, he joined the Clowns. In 26 games, Aaron hit .366 with five homers and 33 runs batted in.

On 11 June 1952 Dewey Griggs, a scout with the Boston Braves, bought Aaron’s contract from Indianapolis for $10,000. Aaron was assigned to the Eau Claire Bears, a Braves affiliate, where he played second base. Aaron was named Northern League rookie of the year after hitting .336 in 87 games. He scored 89 runs on 116 hits with 9 homers and 61 runs batted in.

Aaron broke the color line in the South Atlantic League when he was promoted to the Jacksonville, Florida Braves at the start of the 1953 season. Aaron experienced racial taunts from fans, epithets from players, and bean balls from pitchers. He also fielded death threats. He later recalled that fans would never let him forget he was Black.

Aaron responded by becoming the South Atlantic League’s Most Valuable Player. He collected 208 hits in 137 games, slugged 36 doubles, 14 triples, 22 homers, and had 125 runs batted in with a batting average of .362.

The Boston Braves moved to Milwaukee in 1953, and on 14 March 1954 their leftfielder Bobby Thomson broke an ankle in a spring training game. The twenty-year-old Aaron took his roster spot and made his major league debut on 13 April 1954. Ten days later he hit the first of his 755 major league home runs.

Aaron hit .314 in 1955 and led the National League in doubles with 37. He was selected for his first of 24 all-star games. In 1956 Aaron led the National League with 200 hits, 34 doubles, and a .328 average. Aaron would hit more than 20 home runs in twenty consecutive seasons. He batted over .300 in ten of eleven seasons. Aaron scored over 100 runs in thirteen straight seasons and drove in more than 100 runs eleven times.

Aaron’s extraordinary success was subject to racial profiling in the national press. Time magazine assured readers Aaron was “not as dumb as he looks” (29 July 1957). He became a caricature in the Saturday Evening Post, which smirked that Aaron appeared to run in “snowshoes” (25 August 1956).

Aaron’s eleventh inning home run on 23 September 1957 sent the Braves to the World Series. Aaron’s 11 hits, 3 home runs, 7 runs batted in, and .393 average made the Braves a seven-game winner over the New York Yankees. He was named the National League’s Most Valuable Player with 44 homers, 118 runs scored, and 132 runs batted in.

The Braves moved to Atlanta in 1966, where Aaron’s home runs surged from 32 to 44, winning him a $100,000 contract. He homered 39 more times in 1967. The city’s warm nights made Fulton County Stadium a home-run launching pad. At thirty-three, Aaron had amassed 481 home runs in fourteen years as a major league ballplayer. He would need 234 more to pass Babe Ruth’s record of 714 homers.

Aaron’s powers of concentration and lightning quick wrists overcame his chronic back pain and an arthritic right knee. His 600th homer came on 27 April 1971 against San Francisco pitcher Gaylord Perry. Only Ruth and Willie Mays had reached that plateau. At the age of thirty-seven, Aaron hit 47 homers in 1971, his single season high. In 1972 he became baseball’s first $200,000 player.

Aaron hit 34 home runs in 1972, leaving him only 41 shy of Ruth’s record. On 21 July 1973, in his 12,535th plate appearance in the major leagues, Aaron golfed an inside fastball from Philadelphia Phillies pitcher Ken Brett 400 feet for his 700th career home run. Of the nearly one million letters Aaron soon began receiving, three in four urged him to break the record. Many letters, however, with filled with hate. Racial slurs were common. Death threats were forwarded to the FBI. Aaron and his family received bodyguards.

“No number of guards can keep you alive,” one letter read. “I’m watching your every black move,” warned another. “Retire or die!” one writer demanded. If Aaron took the field, he would be “shot on sight” (I Had a Hammer, pp. 237–8). Atlanta Journal sports editor Lewis Grizzard quietly prepared Aaron’s obituary, just in case. The letters, Aaron painfully recalled, “carved a piece of my heart away” (New York Times, 23 Jan. 2021).

The bigotry only hardened Aaron’s resolve to break Ruth’s record. On 29 September 1973 he hit his 40th home run of the season off a slow curve by Houston Astros pitcher Jerry Reuss. It left Aaron with 713 homers, one short of the record, going into the 1974 season.

After a long six-month wait Aaron tied the all-time home run record on 4 April 1974 with his first swing of the season, smashing a sinker to left center off Cincinnati starter Jack Billingham. One in four American homes were watching NBC’s national coverage four nights later in Atlanta. It was misty at 9:07 in the evening when Aaron lined a fourth-inning thigh-high fastball from Dodger starter Al Downing over the left field wall.

“What a marvelous moment for baseball,” Dodgers announcer Vin Scully said after Aaron serenely circled the bases, even as two fans ran onto the field to congratulate him, a potentially dangerous lapse of security. When he touched home plate, Aaron was engulfed by celebrating teammates as fireworks popped overhead. “A black man is getting a standing ovation in the Deep South for breaking a record of an all-time baseball idol,” Scully exulted. “It’s a great moment for all of us.” The game was stopped, and Aaron told listeners through a field microphone, “I just thank God it’s all over with” (NBC’s Game of the Week, 8 Apr. 1974).

Aaron addressed the U.S. House of Representatives on 13 June 1974, saying he hoped his achievement would encourage reconciliation between the races. In November 1974 Aaron announced he would finish his career in Milwaukee with the Brewers, who came to the city in 1970.

When Aaron retired after the 1976 season, he became an executive with the Atlanta Braves and urged other teams to hire and promote minorities on the field and off it. As executive vice president, Aaron oversaw the Braves farm system and helped build the team that won the World Series in 1995. Aaron later owned car dealerships and a restaurant chain.

Aaron was inducted into the Major League Baseball Hall of Fame in 1982 in a near unanimous vote. “The way to fame is like the way to heaven—through much tribulation,” he said at the ceremony (National Baseball Hall of Fame, 1 Aug. 1982). Aaron was baseball’s all-time leader with 3,298 games played, 12,364 at bats, 755 home runs, and 2,297 runs batted in. Aaron’s 6,856 career total bases, a major league record, led second place finisher Stan Musial by more than twelve miles.

In 1994 Aaron established the Chasing the Dream Foundation to offer scholarships to underserved students. Major League Baseball introduced the Hank Aaron Award in 1999, honoring the top hitter in each league as voted by fans and the media. In 2002 he received the Presidential Medal of Freedom.

When Barry Bonds broke Aaron’s career home run record on 7 August 2007, Aaron congratulated him in a videotaped message, despite widespread reporting that Bonds had used performance enhancing drugs to do it. Aaron said he hoped the event “will inspire others to chase their own dreams” (Bryant, p. 513).

On 22 January 2021, seventeen days after Aaron publicly received a Covid-19 vaccination to encourage other Americans to do so, he died in his sleep at his Atlanta home. Doctors found no connection between the vaccination and his death.

Henry Aaron was the quiet hero of a better way who helped to counter the disrespect he and all African Americans had endured for generations. He was an ambassador of change who pushed through hatred to break baseball’s most iconic record. When he did, Aaron said he felt—for the first time in his life—truly free. His strength and courage evoked a respect and appreciation that freed others to transcend racial bigotry and participate—as Aaron did—in the ongoing work of national healing.

Aaron collaborated with Stan Baldwin and Jerry Jenkins for Bad Henry (1974). Aaron worked with Lonnie Wheeler on his autobiography, I Had a Hammer: The Hank Aaron Story (1991). Aaron’s relationship with fans is chronicled in Sandy Tolan, Me and Hank: A Boy and His Hero, Twenty-five Years Later (2000).Find it in your libraryGoogle PreviewWorldCat Aaron’s home run quest is examined in Tom Stanton, Hank Aaron and the Home Run that Changed America (2004).Find it in your libraryGoogle PreviewWorldCat A major biography is Howard Bryant, The Last Hero: A Life of Henry Aaron (2010).Find it in your libraryGoogle PreviewWorldCat Significant obituaries on 22 Jan. 2021 appear in the Atlanta Journal-Constitution, Milwaukee Journal, New York Times, Los Angeles Times, and Philadelphia Tribune.