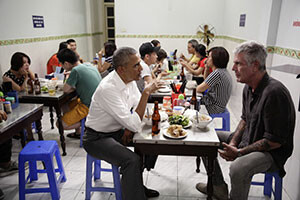 Bourdain, Anthony (25 June 1956–8 June 2018), chef, author, and television personality, was born in New York City, the eldest of two sons of Pierre Bourdain, whose father had immigrated from France, and Gladys Bourdain (née Sacksman), who grew up in a middle-class Jewish American family in the Bronx. Pierre managed a record store before working as an executive for the London and Columbia classical music labels. Gladys was a copyeditor at the New York Times. Anthony grew up in suburban Leonia, New Jersey, where he initially attended public school. After his father received an inheritance, Bourdain attended the private Dwight-Englewood School starting in fifth grade. He graduated in 1973.

Bourdain enrolled at Vassar College that fall to be with his high school girlfriend, Nancy Putkoski. The couple spent a summer in Provincetown, Massachusetts, where Bourdain took a job as a dishwasher at the Flagship, a seafood joint. He romanticized the cooks as modern-day pirates, a tattooed, knife-wielding band exulting in their easy camaraderie, profane banter, sexual exploits, alcohol consumption, and casual thievery. Eager to join their tribe, he dropped out of Vassar after only two years and enrolled in cooking school at the nearby Culinary Institute of America, graduating in 1978. Later he lived with Nancy in a rent-stabilized apartment in Manhattan while he held many short-lived jobs as a line cook at restaurants. They married in 1985. Colleagues saw Bourdain as a proficient cook and a charismatic and charming figure in the kitchen, but his career was hindered by his addictions to cocaine and heroin.

In his late twenties, Bourdain wrote for a downtown magazine, Between C and D, edited by Joel Rose, who became a close friend. He also took a creative writing class with the renowned editor Gordon Lish. After overcoming his heroin addiction through methadone treatment, Bourdain became intensely focused on work. His college roommate, Gordon Howard, a licensing executive at Random House, introduced him to an editor there, David Rosenthal, who published Bourdain’s first novel, the crime mystery Bone in the Throat, in 1995, followed by Gone Bamboo in 1997. Despite some critical praise and a flattering New York Times profile of him in 1997, the books sold modestly.

Rose encouraged Bourdain to switch to writing nonfiction about his life as a restaurant cook. Bourdain, then working as chef of Les Halles, a French brasserie, wrote a 10,000-word first-person essay. His mother approached a friendly colleague at the New York Times, reporter Esther Fein, and asked her to show the text to her husband, David Remnick, editor-in-chief of the New Yorker, which published it in 1999. Then Rose’s wife, Karen Rinaldi, who had just started working as a book editor at Bloomsbury, signed Bourdain to a deal for Kitchen Confidential, a funny, profane, and disarmingly honest memoir. The publisher ordered 11,000 copies for the initial print run in 2000, but the book sold more than 1 million copies, turning Bourdain into a celebrity at age forty-four.

Bourdain agreed to follow the book’s success with A Cook’s Tour, writing about his travels around the world in search of gastronomic adventures. He agreed to let producers Chris Collins and Lydia Tenaglia track him with their cameras for an accompanying TV series (2002–2003) for the Food Network. Their collaborations continued with No Reservations (2005–2012) and The Layover (2011–2013) for the Travel Channel and Parts Unknown (2013–2018) for CNN, which was the network’s most-watched program and which won several Emmy Awards. Bourdain’s initial focus was his culinary daring—eating the beating heart of a cobra in Vietnam, bull’s penis soup in Malaysia, and warthog rectum in Namibia. But the episodes evolved into insightful cultural explorations with a political edge. In Libya, Congo, and Gaza, he showed how ordinary people lived amid violence. In Laos he dined with a man who lost an arm and a leg to an American explosive left over from the Vietnam War. In Hanoi he slurped noodle soup and drank beer with President Barack Obama, picking up the six-dollar tab.

Bourdain’s TV stardom precipitated his divorce from Nancy, who recoiled from the intrusiveness of fame. In 2005 he began a relationship with Ottavia Busia, a Sardinian native who managed Geisha, a Manhattan restaurant. On their second date, they got matching tattoos of a chef’s knife.

In 2006 Bourdain was shooting a TV episode in Beirut when Lebanon broke into war with Israel. He and the crew had to be evacuated by US Marines. Returning to New York with a sense of his mortality and a desire to leave a legacy, Bourdain conceived a child with Busia. In 2007, eleven days after the birth of their daughter, the couple married at City Hall. Following his wife’s example, Bourdain became a jiu-jitsu enthusiast, quitting smoking and working out every day wherever he was. Although Bourdain was a doting and playful father, the marriage suffered, as he spent 250 days a year traveling for TV shoots and speaking tours.

While starring in his TV series, Bourdain wrote essay collections; co-authored cookbooks and graphic novels; ran his own book publishing imprint at HarperCollins’s Ecco; wrote scenes for the HBO television series Treme; invested in the website Roads & Kingdoms; and appeared as a judge for TV cooking competition shows, including The Taste (2013–2015).

In 2016, Bourdain separated from his wife. While shooting Parts Unknown in Rome, he met Asia Argento, an Italian actor and director, and they began a romance. After Argento claimed publicly in 2017 that she had been raped by the movie mogul Harvey Weinstein, Bourdain became an outspoken ally of the #MeToo movement and expressed regret over the macho posturing of his early writings. Argento became a collaborator on Parts Unknown, directing episodes in Rome and Hong Kong.

In June 2018, Bourdain was shooting the series in Alsace, France, with his longtime friend, the French chef Eric Ripert, when an Italian tabloid published photos linking Argento romantically with a French journalist in Rome. The National Enquirer told Bourdain it would reprint the photos in the United States. On the morning of June 8, Ripert found Bourdain’s dead body in Bourdain’s hotel room: His friend had died by suicide by hanging himself. In New York, Bourdain’s fans transformed the facade of his former restaurant, Les Halles, into a shrine, covering the sidewalk and windows with letters, drawings, flowers, and photographs.

Bourdain was one of the most compelling and beloved literary voices on food and cooking in any generation. His unabashed lust for eating harkened to earlier luminaries such as A. J. Liebling and M. F. K. Fisher. With his exposé of behind-the-scenes conditions in restaurants and the hard lives of culinary workers, he carried forward the legacy of George Orwell’s Down and Out in Paris and London. His championing of street food and overlooked immigrant cooks made him a kindred spirit of his contemporary, Pulitzer Prize winner Jonathan Gold at the Los Angeles Times. Despite his protests against the excesses of fine-dining establishments, Bourdain enthused about innovations at high-end restaurants such as Ferran Adria’s “molecular gastronomy” at Spain’s El Bulli and Fergus Henderson’s “nose-to-tail eating” at London’s St. John. Bourdain’s television series were remarkable for their rare power to engage mainstream American audiences with the lives and cultures of people around the world.