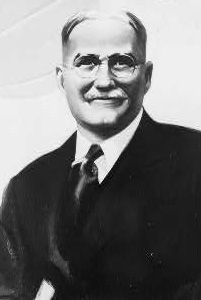 Photograph of an oil painting by Lon Keller, 1941.

Naismith, James (06 November 1861–28 November 1939), inventor of basketball, was born in Almonte, Ontario, the son of John Naismith, a lumberman and carpenter, and Margaret Young. In 1870 both of Naismith’s parents died in a typhoid epidemic, leaving him to be raised by a religiously strict grandmother and then by a bachelor uncle. His schooling was interrupted by five years’ work in a logging camp, but in 1883 he entered McGill University, intending to study for the ministry. After receiving his A.B. in 1887, he studied theology for three years at a Presbyterian seminary affiliated with McGill; during his last year he directed undergraduate gymnastics classes. Having excelled athletically in school, he decided that rather than become a clergyman he could do good more effectively by combining sport and religion in the teaching and promotion of physical education. In 1890 he enrolled in a two-year course for Young Men’s Christian Association (YMCA) physical directors at a new training college in Springfield, Massachusetts.

At Springfield, Naismith distinguished himself on the football field as well as in the classroom. Much lighter than his opponents, who included players on the era’s football powers Yale and Harvard, he aggressively played center under the captaincy of Amos Alonzo Stagg, who became a highly renowned college football coach.

More important, at Springfield, Naismith invented basketball as the only major modern sport without ancient roots to originate in the United States. His mentor, Luther Gulick, keenly felt the need for some indoor competitive game that would be more attractive than gymnastic exercises, filling out the calendar between autumn football and spring baseball. In response to Gulick’s assignment, Naismith devised thirteen simple rules prohibiting the roughness of football and diminishing the usual bunching of players around soccer and ice hockey nets. His innovation featured the tossing of a soccer ball into peach baskets suspended from balcony railings at each end of a gymnasium. In a class of eighteen, nine men played on each team for the first basketball game in December 1891.

This simple, fast-paced game quickly became popular. Within a decade its rules and style of play were streamlined, with Naismith himself serving on several of the rules committees that made changes. His original version merely called for passing the ball before taking a shot. Soon dribbling (bouncing the ball) was permitted, and the size of teams became standardized at five players (six for women) on the court. From Springfield, basketball immediately spread throughout North America and around the world by means of YMCA literature and Springfield-trained personnel. In addition to the YMCA, colleges and high schools promoted it.

Yet Naismith’s invention brought him no immediate fame and never any fortune. From 1891 until 1895 he remained at Springfield, supervising the college’s physical education programs. In 1894 he married a local girl, Maude Evelyn Sherman; they had five children. In 1895 they moved to Colorado, where he directed the physical exercise program at the Denver YMCA while studying at the Gross Medical School. Receiving a medical degree in 1898, he accepted an appointment as the first instructor of physical education at the University of Kansas. He coached the basketball and track teams there until 1905, but he largely lost touch with his own invention as it expanded and became more competitive in the early years of the century. Basketball, he insisted, should be played and enjoyed recreationally, not coached and taken too seriously.

Primarily interested in health and exercise science, at the University of Kansas Naismith gave more attention to intramural programs than to varsity sport. He attended most home basketball games, but he put his energy into creating a comprehensive student health service. For almost forty years he conducted physical exams and established medical records for all new male undergraduates. The effects of competitive athletics on physiological and cardiovascular development especially claimed his attention. He examined campus intramural squads and Kansas high school teams before and after basketball tournaments, and on the basis of X rays and urine tests he concluded that most players were in better, not worse, physical condition after periods of intense competition.

To the end of his days, Naismith remained a muscular Christian moralist, primarily concerned with sport’s contribution toward a healthy body and soul. “With him, questions of physical development inevitably led to questions of moral development, and vice versa,” recalled one of his students. Moral principles informed all of his essays in various physical education journals, a chapter on athletics in The Modern High School (1916), and a pamphlet, The Basis of Clean Living (1919). For several years he directed daily chapel services at Kansas. In 1916 he was ordained as a Presbyterian minister, and in that same year he spent four months as chaplain and chief hygienic officer for the First Kansas Regiment (National Guard) stationed on the Mexican border. From 1917 until 1919 he served in a similar dual capacity for the YMCA. First at army bases in the United States and then for nineteen months in France, he attempted to raise the morale and protect the morals of American servicemen by means of exhortation, hygienic instruction, and competitive athletics. French and Italian army teams vigorously competed against Americans at the Inter-Allied Games of 1919.

Naturalized as a U.S. citizen in 1925, Naismith might have lived out his life as an obscure midwestern college professor had not one of his former students, Forrest “Phog” Allen, campaigned to make basketball an Olympic sport. Allen, an energetic, highly successful coach at Kansas, finally succeeded in getting basketball put on the program for the 1936 Berlin games; he insisted that Naismith should be the event’s honorary guest. The National Association of Basketball Coaches agreed, urging colleges and universities to charge an extra penny to each of their 1935–1936 games to raise enough money to send Naismith to Berlin. According to one estimate, the fund amounted to $1,000 or so. Ironically, Berlin rain made the outdoor basketball games much like the passing, low-scoring style that Naismith created almost a half-century earlier. Canadian and American teams appropriately reached the finals, with the Americans winning individual gold medals by the modest score of 19–8.

Naismith returned home stooped and tired. In 1937 he retired from teaching. Within the year, his wife died. Two years later he married a widow friend, Florence Mae Kincaid. Naismith died in Lawrence.

By 1939 virtually every American high school and college sponsored a basketball team. Far more than Naismith ever anticipated, the college game thrived. In its rules and in the speed, agility, and skill required of participants, it vastly differed from the game first played in that small gym in Springfield, but the rudiments remained the same. Naismith would have appreciated the eulogy from the Journal of Health and Physical Education, which praised him as “an athlete who could practice medicine and preach a sermon,” as “a physician who encouraged healthful living through participation in vigorous activities,” and as a builder of “character in the hearts of young men.” Whatever the later commercial developments of basketball, Naismith’s invention of the game for purposes of moral and physical health fulfilled both his ministerial and medical callings. Enshrining him as a charter member in 1959, the Naismith Memorial Basketball Hall of Fame in Springfield is named in his honor.

The bulk of Naismith’s papers are in the private possession of his descendants, but several dozen pieces of correspondence and notes reside in the University of Kansas archives in Lawrence. Naismith’s own posthumously published Basketball: Its Origin and Development (1941) is more of a personal memoir than the title suggests, especially for his early years. The only full biography, Bernice Larson Webb, The Basketball Man: James Naismith (1973), was reprinted with a helpful afterword by Steven Jansen (1994). John Dewar’s “The Life and Professional Contributions of James Naismith” (D.Ed. diss., Florida State Univ., 1965) is immensely useful. See also R. Tait McKenzie, “Reminiscences of James Naismith,” Journal of Health and Physical Education, Jan. 1933, pp. 21, 55; M. Whitcomb Hess, “The Man Who Invented Basketball,” American Scholar, Jan. 1949, pp. 87–92; and Grace Naismith, “Father Basketball,” Sports Illustrated, 31 Jan. 1955, pp. 64–65. An obituary is in the New York Times, 28 Nov. 1939.