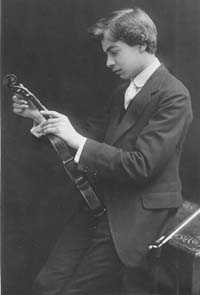 Around the time of his London debut.

Brown, Eddy (15 July 1895–14 June 1974), violinist and radio pioneer, was born in Chicago, Illinois, the son of Jacob Brown, a tailor and amateur violinist from Austria, and Rachel “Ray” Brown (maiden name unknown) from Russia. His mother, who had a keen interest in Christian Science, named him after Mary Baker Eddy. The Brown family moved to Indianapolis when Eddy was four. He took his first violin lessons from his father and then studied with Hugh McGibney at the Metropolitan School of Music (later Butler University's Jordan College), giving his first public recital at the age of six. In 1904 he traveled to Europe and entered the Royal Conservatory of Music in Budapest to study violin with Jenö Hubay. His teachers there included Béla Bartók, Zoltán Kodály, and cellist David Popper. In 1906 Brown won the Budapest Concerto Competition. (Finishing second was a young violinist and fellow Hubay student named Jenö Blau, who later changed his name to Eugene Ormandy and became a famous conductor.) The next year Brown opened the new hall at the Liszt Conservatory with a performance of the Mendelssohn concerto.

In 1909 Brown graduated from the Royal Conservatory with an artist's diploma and the Premier Prix. That year he made his official Budapest debut with a performance of the Beethoven concerto. David Popper called it the best performance of the concerto that he had heard since Joseph Joachim. Brown continued his studies that summer with Hubay in Ostende and in October made his London debut at Albert Hall, playing the Tchaikovsky concerto with the London Philharmonic under Sir Landon Ronald. The renowned violin teacher Leopold Auer encouraged Brown to study with him in Russia. Brown agreed. After an extensive tour of England, Brown made his Russian debut and entered Auer's class at the St. Petersburg Conservatory the same month as did another prodigy, Jascha Heifetz. Brown stayed on with Auer for five years as one of his star pupils, making his Berlin debut in 1910 playing the Brahms concerto with the Berlin Philharmonic under the direction of Artur Nikisch.

Flyer for an Eddy Brown concert

In 1916 Brown returned to the United States. His debut took place on 17 January in his hometown, Indianapolis, where he played the Beethoven concerto with the New York Symphony conducted by Walter Damrosch, repeating the program at the Metropolitan Opera House in New York City that same week. He also made his New York recital debut at Aeolian Hall on 19 January. It was so successful that he gave four more recitals there in as many weeks and made his Boston debut on 2 April. That was followed by appearances with all the leading orchestras. In Philadelphia, a critic said, “In emotional eloquence, sincerity and pervasive appeal, his playing comes closer to that of Kreisler than any other violinist of the younger generation.” After a performance of the Tchaikovsky concerto with the Chicago Symphony, another critic wrote that Brown “simply electrified the well-seasoned orchestra habitués who, accustomed to great performances, seldom are surprised out of their composure by any artist, however sensational.” On 11 November 1917 Brown gave the United States premiere of the Debussy violin sonata at Carnegie Hall, and when Leopold Auer came to the United States in 1918, he made a point of attending one of Brown's Carnegie Hall recitals. Brown had joined Maud Powell and Albert Spalding as part of the first wave of great American-born concert violinists.

Columbia Records quickly signed up the young sensation, issuing his first recordings in the summer of 1916, and Carl Fischer, Inc., published a series of his violin transcriptions. Brown even followed in the tradition of Fritz Kreisler and Efrem Zimbalist, Sr., by composing a musical called “Roly-Boly Eyes” with Louis Gruenberg (who also served as piano accompanist for several Brown recordings). The musical opened in 1919 and ran on Broadway for two years at the Knickerbocker Theater. Brown called it the most profitable thing he ever did. In 1921 he married Polish actress Halma Bruzovna. They had no children and quickly divorced. In 1926 he married the American opera singer Beth Lydy, who starred in many Broadway musicals under the stage name Lyda Betti. They also had no children.

Brown continued to tour abroad, making appearances with conductors such as Wilhelm Mengelberg, Felix Weingartner, Hans Richter, and Max Fiedler. He recorded for German Odeon in the 1920s, including an acoustic Mendelssohn concerto with Friedrich Weissmann and unissued performances with Wilhelm Furtwangler. He also formed a string quartet with violinist Edwin Bachman, violist William Schubert, and cellist Lajos Shuk and established the Chamber Music Society of America. In 1956 Musical America magazine declared that his work with the Society “anticipated the present boom in chamber orchestras and the Baroque and early Classic repertoire by several years,” and “laid the foundation for the cultivation of public taste in these fields.”

In 1930 Brown's career took a new direction: he became one of the pioneers of American radio when, after mentioning the possibilities of cultural education through radio at a dinner party, he was named musical director of the Mutual Broadcasting Corporation radio station WOR in New York. In his new post at WOR, Brown launched an innovative series of programs: a Sunday evening chamber music series, a series devoted to “Famous Women Pianists,” and a series devoted to modern American orchestral music. Brown's wife Beth Lydy wrote many of the scripts for these programs. Brown also performed much of the violin repertoire in a weekly series called “Masters of the Bow” that ran for three years. He performed sonatas by modern American composers, often with the composer at the piano, and gave the first radio performance of all ten Beethoven sonatas with pianist Clarence Adler.

After several years, WOR came under a management less committed to classical music. In 1936 Brown resigned and became director of WQXR, a fledgling new station in New York. Under his direction, it became the first radio station in the United States to devote itself exclusively to classical music. His example paved the way for the type of cultural programming now found on National Public Radio. He remained director of WQXR until 1942; he sold his interest in the station in 1949.

Brown's involvement with radio largely put a halt to his touring career as a soloist. Virtually none of his hundreds of radio broadcasts survive, although he made a series of recordings for the Royale label in the late 1930s (including his only sonata recordings: the Grieg G Major, with Clarence Adler, and John Powell's “Sonata Virginianesque,” with the composer at the piano). He also recorded compositions by American composers Daniel Gregory Mason and Albert Stoessel, as well as Baroque duos with violinist Roman Totenberg and a dashing performance of Henri Leonard's nineteenth-century bon-bon “Serenade Humoristique,” with violinists Mischa Mischakoff and Benno Rabinoff (another Auer pupil).

In 1949 Brown and his wife returned to Europe at the behest of the U.S. State Department to establish cultural ties between the United States and European countries. While there, they also founded, with the aid of the Italian government, the Accademia Internazionale di Bel Canto, a school and theater for young singers in Bordighera, a town on the Italian Riviera. His ties with the State Department and the new school culminated in the establishment of the American Opera Auditions, which allowed young American singers to perform in Europe and study at the Accademia. Brown's interest in opera was long-standing. As early as the 1930s, he had collaborated with his wife in producing summer productions of Mozart in Connecticut.

In 1956, Brown and his wife became artistic coordinators and master teachers at the University of Cincinnati College-Conservatory of Music in Ohio. He continued to champion American music. His only LP recording was of the violin concerto by American woman composer Mana-Zucca, which he called “the most outstanding violin concerto written by an American.” He returned to Indianapolis in 1971 as Artist-in-Residence at Butler University—the place where he had begun formal violin lessons some seventy years earlier. He died unexpectedly in Abano, Italy, while en route to Budapest to speak at the Liszt Academy.

Brown, though largely forgotten a quarter century after his death, contributed enormously to the development of classical music in the United States. Recordings of his violin playing confirm that he was one of Auer's finest pupils.