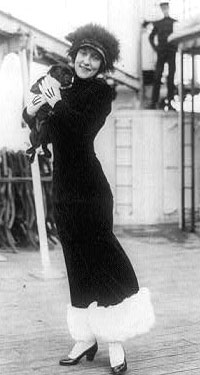 Kellerman, Annette (06 July 1887–05 November 1975), swimming, vaudeville, and film star, was born in Sydney, Australia, the daughter of Frederick Kellerman, a musician, and Alice Charbonnet, a concert pianist. A weak child, Kellerman began swimming as physical therapy for a mild case of polio. Feeling more graceful in water than on land in her leg braces, swimming literally became her life. As the strength in her legs increased, she also learned to dive. In 1902 she won her first title as Swim Champion of New South Wales and set a world record of 78 seconds for 100 yards using the newly introduced racing technique of the double-over arm crawl and scissors kick. By her own admission, she also reigned as the champion girl diver of Australia the same year. The next year, she set a world record for the mile at 32:29 minutes, subsequently lowering it to 28:00 minutes. Her first of many record-setting distance swims covered 10 miles in Australia’s Yarrow River. She began professional swimming and diving exhibitions in Sydney, then toured Melbourne and Adelaide.

In 1904 her father took her to England to promote her aquatic skills. Sponsored by the Harmsworth newspapers, she swam 17 miles down the Thames and attempted to be the first woman—and the first person in thirty-six years—to swim the English Channel. Her three attempts failed, but her covering of three-fourths of the distance in 10.5 hours remained a women’s record for many years. After more swimming stunts—notably a 7-mile swim in the Seine through Paris and a 22-mile swim in the Danube from Tuln to Vienna—garnered her more publicity, she signed with Arthur Collins, the “Prince of Showmen,” to star in his London music hall. Her swimming and diving act then toured Great Britain with great success.

Kellerman’s arrival in the United States in 1907 erupted in scandal when she appeared on Boston’s Revere Beach in a one-piece bathing suit, a style of racing suit she always wore even when she was not competing. Arrested for indecent exposure, her court case brought her instant fame as the progenitor of modern swimwear. Women began to abandon the cumbersome and heavy wool skirts, blouses, and stockings Victorian mores dictated they wear. After her charges were dismissed in Boston, she traveled to Chicago for her first American playdate at the White City Amusement Park, where she did fifty-five shows a week for seven weeks. B. F. Keith then engaged her as a headliner in his Keith/Orpheum vaudeville circuit for $1,250 a week. She remained with Keith for two years, performing fourteen shows a week. Her act consisted of singing, dancing, playing the violin, tightrope walking, diving, and swimming in a large glass cage. In 1910 she signed with William Morris to manage her vaudeville career (resulting in a lawsuit by Keith/Orpheum), and in 1912, when she married James Sullivan, she decided to let her new husband manage her career (requiring her to sue William Morris). Under Sullivan’s management, they built a small fortune in vaudeville (including five world tours between 1914 and 1929 and numerous appearances at New York City’s Hippodrome) and moved into filmmaking.

Kellerman had made her U.S. film debut in a Vitagraph short, Diving Venus (1909), for which she received the largest salary the studio had ever paid and her own glass tank. She demonstrated some exercises, dives, and swimming techniques. Her first feature film, Neptune’s Daughter (Universal, 1914), won major acclaim. She played a mermaid granted legs so that she could seek out the humans who killed her younger sister. The film, shot on location in Bermuda, fully exploited her diving and swimming skills featuring a 45-foot solo dive, a 30-foot tandem dive, and much underwater swimming. She followed this success with A Daughter of the Gods (Fox, 1916). Shot on location in Jamaica, the film took nine months to shoot, featured a cast of 20,000, required the construction of two cities (one underwater), employed a camera in a diving bell, and cost over $1 million (a record budget). As before, the film functioned as a showcase for Kellerman’s abilities; her greatest stunt was a 92-foot dive—for which she was bound hand and foot. She made three more feature films, Queen of the Sea (1918), What Women Love (1920), and Venus of the South Seas (1924). What Women Love won her the title of “the Douglas Fairbanks of the Screen Girls Athletic Association.” Of these five films, only ten minutes from Neptune’s Daughter seems to have survived.

In 1918 Kellerman published two books designed for women, Physical Beauty and How to Swim. Physical Beauty railed against the corset while extolling the virtues of exercise and diet (she was a vegetarian) to achieve proper posture, strength, and body tone. She demonstrated through illustration and direction how to achieve her world-renowned physical perfection. How to Swim followed the same tack, advocating swimming as an excellent form of exercise. These books were among the first to offer women a regimen of physical fitness.

After her last world tour ended in 1929, she limited her activities to the always popular “Swimologues” (physical fitness lecture tours featuring underwater films shot by her husband), running a health food store in Long Beach, California, and relaxing on Pandamus Island, an island inside Australia’s Great Barrier Reef that she and her husband owned. During World War II she devoted her talents to charity benefits (as she had during World War I) and established and ran an Australian Red Cross theatrical unit. Her life came full circle in 1952 when MGM released Million Dollar Mermaid, starring Esther Williams. A fictionalized biography of Kellerman, she served as technical adviser on the film. Million Dollar Mermaid follows Kellerman’s life from her early years as a crippled child to the spectacular Hippodrome shows to her severe accident when an 8,000-gallon glass tank broke during the filming of Neptune’s Daughter.

After her husband died in 1953, she moved to Southport, Queensland, Australia, where she lived for more than twenty years, until her death there. In 1974 she was inducted into the International Swimming Hall of Fame in Fort Lauderdale, Florida, for “doing more to popularize swimming (especially for women) than any other person in the early years.”

Kellerman’s aquatic skills set numerous records and served as the basis for many years of a successful international vaudeville career—a career in which she helped introduce synchronized swimming with her Acquabelles and women’s high diving. Her move into film stardom established the tradition of Hollywood’s exploitation of successful athletes (for example, Johnny Weissmuller, Sonja Henie, Esther Williams, and Arnold Schwarzenegger) in films tailored to showcase their unique talents. The publicity surrounding her one-piece bathing suit altered the course of women’s swimwear design toward the contemporary styles of the maillot, tank, and bikini. She was an athletic feminist, and her lectures, books, performances, and films encouraged and inspired women to break away from the antiathletic tradition of their gender to pursue health and beauty through exercise and diet. As “swimming’s greatest saleswoman,” Kellerman took an esoteric sport and moved it into popular culture.