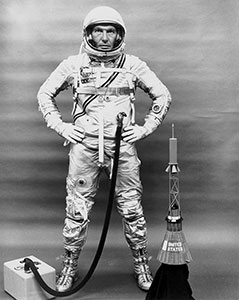 Schirra, Wally (12 Mar. 1923–3 May 2007), astronaut, aeronautical engineer, and television commentator, was born Walter Marty Schirra, Jr. in Hackensack, New Jersey to army aviator and engineer Walter Marty Schirra, Sr., who flew bombing missions over Germany in World War I, and Brooklyn-born Florence Leach Schirra, who barnstormed after the war as a wing walker in the couple’s Curtiss Jenny.

Wally soloed by the time he graduated from Englewood’s Dwight Morrow High School in 1940. He studied aeronautical engineering at the Newark College of Engineering and was commissioned as an ensign when he graduated from the US Naval Academy in 1945. Schirra reported to the armored cruiser Alaska on Okinawa in July 1945. The war ended the next month, before he saw combat.

Schirra completed pilot training at the Pensacola Naval Air Station in 1948 and received the Distinguished Flying Cross after flying ninety combat missions in F-84 jets during the Korean War. He was a Navy pilot over the next decade, testing Sidewinder air-to-air missiles in China Lake, California between 1951 and 1953 and the F7U-3 Cutlass jet fighter between 1954 and 1956. He was operations manager for the 124th Fighter Squadron on the carrier Lexington in 1956–1957. Schirra completed test pilot training at the Naval Air Test Center in Patuxent, Maryland, in 1959, having logged 3,800 hours flying time, 2,700 of it in jets.

Schirra was a reluctant astronaut. He considered himself a hotshot test pilot and did not want to leave the Navy. Ordered to the Pentagon, he became intrigued with the idea of “going higher, farther, and faster” (Buckbee and Schirra, p. 15). On 9 April 1959, he was one of seven men selected by the National Aeronautics and Space Administration for Project Mercury, the nation’s new space program. Over the next decade, Schirra logged 295 hours in space and became the only astronaut to fly in Mercury, Gemini, and Apollo, the country’s pioneering effort to beat the Russians to the moon. His motto became a space program catchphrase: “get up and get back.”

Schirra oversaw development of the space program’s life-support systems and pressure suit down to the smallest detail. That careful determination helped him “train out fear” (Neal, p. 44). On 3 October 1962, Schirra became the fifth American in space and the third to orbit the Earth. Schirra named his 4,200-pound space capsule Sigma 7 to honor the team that made the flight a triumph of precision engineering. The 9-hour, 144,000-mile flight orbited the Earth six times, 176 miles up, at a speed of 17,557 miles per hour. It made Schirra a national hero. On 16 October he and his family received the congratulations of President John Kennedy at the White House, and Schirra was awarded the first of his two Distinguished Service Medals.

Schirra piloted Gemini 6 on 15 December 1965 to within a foot of Gemini 7 170 miles above the Earth in the first close rendezvous in space between two manned spacecraft. It was Schirra’s favorite flight because it tested the limitations of imagination and daring to enable astronauts and on-board computers to fulfill complicated tasks. The docking maneuver proved critical in taking men to the moon. The recovery of Schirra and copilot Thomas A. Stafford and the Gemini 6 capsule by the USS Wasp in the North Atlantic on 16 December was the first telecast live worldwide.

Schirra’s final flight for the space program was his most important. Apollo 7 was launched on 22 October 1968, NASA’s first manned space flight in twenty-two months following the 27 January 1967 cabin fire aboard Apollo 1 during a launch rehearsal that took the lives of astronauts Gus Grissom, Ed White, and Roger Chaffee. The tragedy led to raging media and Congressional criticism of NASA and a major overhaul of the Apollo spacecraft. Schirra insisted NASA’s ambitious flight schedule had overtaken safety considerations and taken decision-making authority away from astronauts. He was determined to do the next flight right. Schirra’s 11-day, 163-orbit mission with Command Module Pilot Donn Eisele and Lunar Module Pilot Walt Cunningham aboard Apollo 7 proved the worthiness of the Apollo Command and Service Modules. It enabled Apollo 8 two months later to make its famous flight around the moon before returning to Earth. NASA flight director Chris Kraft praised Schirra as a “consummate test pilot who did not make a mistake” (Washington Post).

Schirra retired from NASA on 1 July 1969 and joined CBS News as a space consultant just in time for the first moon landing. Schirra’s on-air assertion “we’re home” at 4:17 Eastern Daylight Time on 20 July 1969 was the first confirmation television viewers had that men had actually landed on the moon. The Apollo 11 moon landing by astronauts Neil Armstrong and Buzz Aldrin was witnessed by more than half a billion people across the planet. CBS coverage famously cut from ecstatic scientists hugging one another in mission control to Schirra, who was wiping away a tear on the CBS set in New York.

Schirra broadcast seven Apollo moon missions, including Apollo 13, which had its moon landing aborted when an oxygen tank exploded in the service module on 13 April 1970, two days after launch and 205,000 miles from Earth. Schirra’s expertise comforted an anxious public on how NASA would use Aquarius, the lunar module, as a lifeboat to return the astronauts and their crippled craft safely to Earth four days later.

After leaving NASA, Schirra consulted for the aerospace industry and ran an environmental company. In 1981, he was inducted into the International Space Hall of Fame. Three years later, he helped create the Mercury Seven Foundation to provide scholarships in science and engineering. That year he also began serving as director of the San Diego Aerospace Museum.

A career in flight and space travel taught Schirra that the planet Earth was unique. A year before his death in La Jolla, California, he wrote a letter to The New York Times and summed up how the space program had changed his view of Earth. “I left earth three times,” he noted, “and found no other place to go” (1 August 2006) The greatest thing in going to the moon, in his view, was what it taught those living on the Earth. He urged them to take very good care of “Spaceship Earth.”

Schirra co-authored We Seven (1962) with six other Mercury astronauts. His autobiography, Schirra’s Space (1988) was co-written with Richard N. Billings. A co-authored book, Wildcats to Tomcats: The Tailhook Navy (1995), detailed his experiences as a bomber pilot in Korea. Along with Ed Buckbee, Schirra reflected on the Mercury Seven in The Real Space Cowboys (2005). A website, http://www.wallyschirra.com, traces Schirra’s career and personal story. A transcript available at http://www.jsc.gov/history/oral_histories/SchirraWM/WMS_12_1_98.pdf includes his interview with Roy Neal on 1 Dec. 1998 for the Johnson Space Center in Houston. His 22 Feb. 2002 interview with Francis French is posted at http://www.collectspace.com/news/news-022202a.html. Significant obituaries on 4 May 2007 appear in The New York Times; Los Angeles Times; and Washington Post.