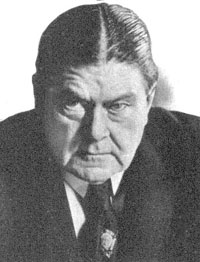 Courtesy of the Library of Congress.

Brady, Diamond Jim (12 August 1856–13 April 1917), businessman and cultural icon, was born James Buchanan Brady in New York City, the son of Daniel Brady, a saloonkeeper, and his wife, whose name is not recorded. After attending local schools until the age of eleven, he left home and became a bellboy at the nearby St. James Hotel. While working there he befriended John M. Toucey, an official with the New York Central Railroad, who offered Brady (by then fifteen) a job in the firm's baggage department. After a few months of moving baggage by day and studying bookkeeping, at Paine's Business College, by night, he became a ticket agent at the Central's Spuyten Duyvil station in the Bronx. In 1874 Brady became a clerk in the home office, and in 1877 he was promoted to the position of Toucey's chief clerk. It was here that Brady began to display his love of fine clothing and nightlife, personal indulgences that would characterize his later lifestyle.

Brady lost his job—under circumstances that remain a mystery—after his older brother (whom he had helped to gain a position with the Central) unfairly blamed him for an office mishap. He quickly rebounded and took a sales job with the railroad supply firm of Manning, Maxwell, and Moore. Although unattractive in appearance and unschooled in both speech and manners, Brady was not only smart and ambitious but also possessed the ability to make people like him. He proved to be a capable salesman of the firm's handsaws, and was soon able to acquire his first diamond. A popular craze at the time, men wore diamonds to signify their social standing, and Brady, who was eager to make his mark in the world, soon became an expert on the subject and was given the nickname by which he is known to this day. With the nation's railroad lines booming as the country entered the 1880s, Brady began to sell the firm's entire product line and reaped enormous commissions. This income, combined with his expense account, was spent on the types of lavish dining and entertainment that Brady would enjoy for the rest of his life.

In 1888 Brady joined forces with Sampson Fox, an Englishman who had struggled to promote his idea of an all-steel undercarriage for railroad cars. While popular overseas, American railroad men had been openly skeptical of the design, feeling that it would not be adaptable to the American rail system. Brady shrewdly arranged for a demonstration of the design, and, with the skeptics now quieted, orders flew into the firm of the Fox Solid Pressed Steel Company. Brady, who also continued to work for Manning, Maxwell, and Moore, soon was wealthy beyond his dreams. Now able to indulge his love for theater, fine clothing, and fine dining to an unlimited extent, Brady became one of the best-known figures in New York. Throughout the “Gay Nineties” and the first decade of the new century, he was constantly a subject of press coverage as he attended opening nights at the theater decked out in impeccably tailored suits lavishly decorated with diamond displays; his parties became the stuff of legend, as did his gastronomic exploits, which often featured Brady enjoying numerous helpings of each item of a fourteen-course dinner. Although intimate with many leading figures of the day—including New York City police commissioner Theodore Roosevelt, who utilized Brady's influence in keeping boxer John L. Sullivan from drinking too much and getting into fistfights—Brady was never really accepted by polite New York society.

Despite his outsider status in the milieu of New York's “old money,” Brady continued to live life on his own terms. Thanks to his near-legendary generosity with both the great and the common folk alike, he was perhaps the most widely known and recognized figure in New York society. Although he never married, he did establish a long-term relationship with Edna McCauley, which ended when she ran off with his best friend. More stable was his ongoing platonic relationship with actress Lillian Russell, who was his constant companion for years and the beneficiary of perhaps his most notorious gift, a gold-plated bicycle that featured a gem-studded frame and mother-of-pearl handlebars.

With the advent of all-steel railroad cars, Brady's second employer eventually merged with a competitor to form the Pressed Steel Car Company in January 1899. While Brady held no office in the firm—preferring the role of salesman—his abundant income continued. In the spring of 1901 he acquired a farm in South Branch, New Jersey (in addition to his lavishly furnished dwelling on Eighty-sixth Street in Manhattan), where he also entertained guests and where in his later years he dabbled in thoroughbred horses.

Never fully satisfied with working for Pressed Steel, Brady formed with engineer John M. Hansen the Standard Steel Car Company in the spring of 1902. Brady served as the firm's vice president in charge of sales, and, based on the industry-wide reputation of the two men, the firm was an immediate success.

As the years went by, Brady's body began to break down from decades of overindulgence. Overweight and suffering from high blood pressure as well as coronary disease, he had as his most serious problem a prostatic obstruction. He entered Johns Hopkins Hospital in Baltimore in 1912 and underwent an experimental operation for gallstones conducted by medical pioneer Hugh H. Young. Treated like a celebrity during his stay (and subject to a fluoroscopic examination that revealed a stomach six times the average size), Brady was so impressed by his treatment that he offered over $200,000 to Hopkins, which resulted in the establishment of the James Buchanan Brady Urological Institute.

Brady died in Atlantic City, New Jersey, after fighting a long battle with diabetes. Under the terms of his will, much of his estate went to charity, and the balance was split between Johns Hopkins Hospital and New York Hospital, which used the funds to establish a urological facility of its own. Diamond Jim Brady is remembered as an example of the wild excesses of his age. Although much of the wealth that he earned was dissipated in various forms of entertainment, his philanthropic generosity to medical research also remains a part of his legacy.

Material relating to Brady's interactions with Johns Hopkins can be found within the Hugh H. Young Papers at the Alan M. Chesney Archives, Johns Hopkins School of Medicine, Baltimore, Md. For biographical information, see Parker Morell, Diamond Jim: The Life and Times of James Buchanan Brady (1934; repr., 1970), and John Burke, Duet in Diamonds: The Flamboyant Saga of Lillian Russell and Diamond Jim Brady in America's Gilded Age (1972). An obituary is in the New York Times, 14 April 1917.