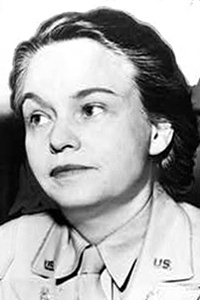 Hobby, Oveta Culp (19 January 1905–16 August 1995), publisher and government official, was born Oveta Culp in Killeen, Texas, the daughter of Isaac William Culp, a lawyer, and Emma Hoover Culp. As a child, Oveta was close to her father and with his encouragement developed an early interest in law. She was educated in the local schools as well as tutored at home, and after graduation from high school she studied at Mary Hardin Baylor College in Belton, Texas, and at the University of Texas Law School in Austin. As a law student she became parliamentarian of the Texas House of Representatives, serving in that post from 1925 until 1931 and later from 1939 to 1941. In her early twenties she also served as a legal clerk in the Texas State Banking Department, and in that capacity she helped to codify Texas banking laws. In addition, in 1930 she served as an assistant to the Houston city attorney.

By this time Oveta Culp had become active in the Democratic party, both locally and at the national level, and was a delegate to the National Democratic Convention held in Houston in 1928. A year later she ran for a seat in the state legislature but was defeated. About this time she began working in the circulation department of the Houston Post newspaper, and in 1931 she married Post publisher William Pettus Hobby, a widower twenty-seven years her senior who had served as the governor of Texas from 1917 to 1921; the couple eventually had two children, a son and a daughter. Their son, William P. Hobby, Jr., later served as the lieutenant governor of Texas for eighteen years.

Following her marriage, Oveta Culp Hobby turned from law and politics to a full-time career in journalism, beginning as a research editor at the Post. Between 1933 and 1938 she was book editor and then assistant editor of the Post; in 1938 she was named vice president of the paper. During this period she was credited with making a number of positive changes at the Post, restructuring its format and departments and giving greater prominence to women's news. By the end of the decade, as her husband gave increasing attention to his other business interests, including banking and radio, Hobby had become the de facto head of the newspaper. She had also revamped her image, transforming herself from a somewhat dowdy small-town girl with a Texas drawl into a well-spoken, impeccably dressed sophisticate who mingled comfortably with Houston high society.

Combining a full-time career with a family seemed to pose little difficulty for Hobby, who was also active in many local and state civic groups. She served as president of the Texas League of Women Voters and as a regent of the Texas State Teachers College, also becoming executive director of a Houston radio station and a director of a local bank. She even found time to write a book on parliamentary law, Mr. Chairman (1937), which was used for many years as a textbook in Texas and Louisiana.

In the summer of 1941, as the United States prepared for its eventual entry into World War II, Hobby was named by President Franklin D. Roosevelt to a dollar-a-year post in the War Department's Bureau of Public Relations. She became the first head of its new women's division, and in that capacity she had the responsibility of keeping wives and mothers of servicemen informed about their loved ones in the military. Later that year she was asked by General George C. Marshall, then chief of staff, to explore setting up a women's auxiliary army. With her recommendations, the Women's Auxiliary Army Corps (WAAC), the first American women's army, was established in May 1942, five months after the United States entered the war, and Hobby became its first director. Initially, she was given the rank of major but was quickly promoted to colonel.

Hobby's first job as head of the newly formed WAAC was to recruit officer candidates for administrative work. When this task was completed by early fall, she then began looking for volunteer recruits, initially some 12,000 and ultimately more than nine times that number. As part of her preparation for her new role, she visited England in October 1942 with Eleanor Roosevelt, the first lady, to assess the war efforts and activities of British women, including the inspection of the Women's Royal Navy Service (WRENS) and the Auxiliary Territorial Service (ATS). Back in Washington she streamlined her organization's name, dropping the word “Auxiliary” in 1943 and giving the renamed WAC status equal to the all-male U.S. Army. By then, WACs, as WAC soldiers were known, were serving in noncombat posts throughout the United States and in the European and Pacific theaters, and by the time the war ended in 1945 there were 100,000 WACs on active duty.

Retiring from her position as head of the WACs in the summer of 1945, Hobby returned to Houston, where she resumed her duties at the Post and enlarged her involvement in civic activities, both local and national. In the late 1940s she served as a consultant to the Hoover Commission, headed by former President Herbert Hoover; the commission studied the obvious need for administrative changes in the Executive Branch of the national government, and Hobby helped draft the report that summarized the commission's findings. She was also active as a leader during the postwar period in several national newspaper organizations as well as the recently formed American Cancer Society. In 1952 she was named coeditor and publisher of the Houston Post.

Although Hobby had been a lifelong Democrat, she broke with the party in 1948 to support the unsuccessful Republican presidential candidate, Thomas E. Dewey. Early in 1952, before the Republican National Convention, she announced her support for one of the likely Republican presidential nominees, General Dwight D. Eisenhower, and used editorials in the Post as a means of gaining the support of the Texas delegation for his eventual nomination at the national convention that summer. In the election campaign that followed, she became active at the national level on behalf of Eisenhower, often working at Republican headquarters in New York City. Following his election in November, Hobby was named by Eisenhower to head the Federal Security Agency (FSA) in Washington, D.C., and assumed the post on 21 January 1953.

The FSA had been created in 1939, and by the time of Hobby's appointment it was the umbrella organization for all departments in the federal government that dealt with the health, education, and social and economic security of Americans. These included the Public Health Service, the Food and Drug Administration, the Office of Education, and the Bureau of Old Age and Survivors Insurance. When Eisenhower took office, however, plans already were under way—in large part as a consequence of the Hoover Commission Report—to reorganize the FSA into a new department with cabinet-level status. On 30 March 1953, barely two months after Hobby took office, the FSA was renamed the Department of Health, Education, and Welfare (HEW) by an act of Congress. Hobby, now a member of Eisenhower's cabinet, took a new oath of office as the first secretary of HEW on 11 April, becoming the second woman in U.S. history to hold a cabinet post (the first having been Frances Perkins).

Hobby served without controversy as head of HEW until July 1955, when she returned to Houston at the behest of her husband to become editor and publisher of the Post and to help run his other business interests. She became chairman of the board of the Post following his death in 1964, continuing in that capacity until she sold the newspaper in 1983. In the following decade she sold most of the family's other business interests, including television stations, but retained ownership of radio station KPRC-AM in Houston. She died at her home in Houston several months after suffering a stroke.

For biographical information, see “Hobby, Oveta Culp,” in Current Biography Yearbook for 1942, 1953, and 1995. See also Who Was Who in America, vol. 11 (1993–1996). In addition, see “Mrs. Oveta Culp Hobby: The First Secretary of the Department of Health, Education and Welfare,” the cover story in the Journal of the American Pharmaceutical Association, Apr. 1953. An obituary appears in the New York Times, 17 Aug. 1995.